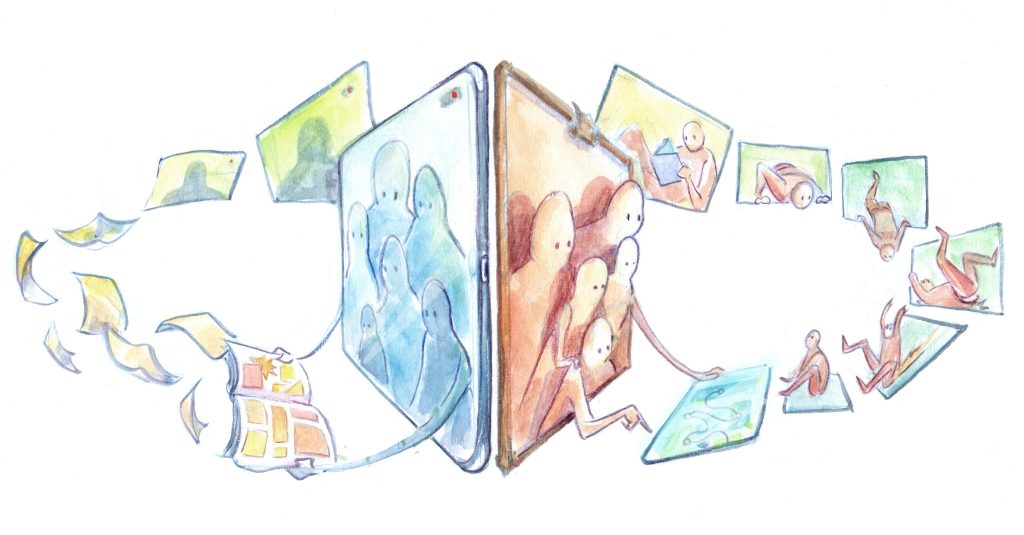 Welcome to the website of the conference Comics strike back: digital comics, digital audiences, digital practices.

Digital comics encompass a variety of works, ranging from print comics that are then digitised or pre-published online to e-comics that resist print publication and have stronger affinities with videogames, animations, and other digital products. Online or offline, static or animated, reproducing the page format or expanding beyond the borders of a screen, digital comics always imply some degree of adjustment of processes and habits, because comics are also cultural objects, creative practices as well as models of production and consumption.

Consequently, scholars have showcased a growing interest in the topic (some of the most interesting contributions include Robert 2016; Baudry 2018; Kashtan 2018; Kirchoff and Cook 2019; Kleefeld 2020; Rauscher, Stein and Thon 2020). Despite this expanding critical attention, the fruitful convergence between comics production and consumption and digital cultures is still far to be exhaustively explored. Much attention has been paid to the many forms of digital comics. Nevertheless, the multifaceted phenomenon of digital comics, especially from a diachronic perspective, remains overlooked. Since the beginnings of the medium in the 1980s and the 1990s, comics authors have actively experimented with its affordances. However, even after more than thirty years digital comics continue to experiment with the medium’s possibilities and expand its potentialities. They remained a hybrid object in the process of becoming, with a heterogeneous and hardly definable status.

Going in search of what makes comics that crisscross media and supports still comics (Frezza 2017: 19), then, implies a complex approach: as Benoît Crucifix and Björn-Olav Dozo affirm, productively adopting perspectives from media archaeology and media comparative theory, “understanding digital comics today requires us to take into account the larger history of intermedial dialogues between comics, film, and animation” (2018: 583). The complexity of this enterprise is perhaps exacerbated by the notorious lack of communication amongst different methodological traditions and languages. The current landscape thus calls for reframing digital comics in a more holistic perspective that accounts for the peculiarities of the medium while managing to place them in a broader context viewed from a multidisciplinary perspective.

In the light of the above, this conference focuses on the social, cultural and economic practices of digital comics. It will discuss the semiotic innovations of digital comics, underlining their symbolic potential and their capacity to throw light on contemporary social dynamics and processes, and analyze medial and cultural convergences, audience practices and the social impact they entail. The conference will hence explore the following lines of investigation:

Here you can find the program of the conference. If you want to follow the conference, just write an email to digitalcomics@ugent.be with your name and affiliation.

Thank you for your patience and interest, looking forward to meeting all of you!